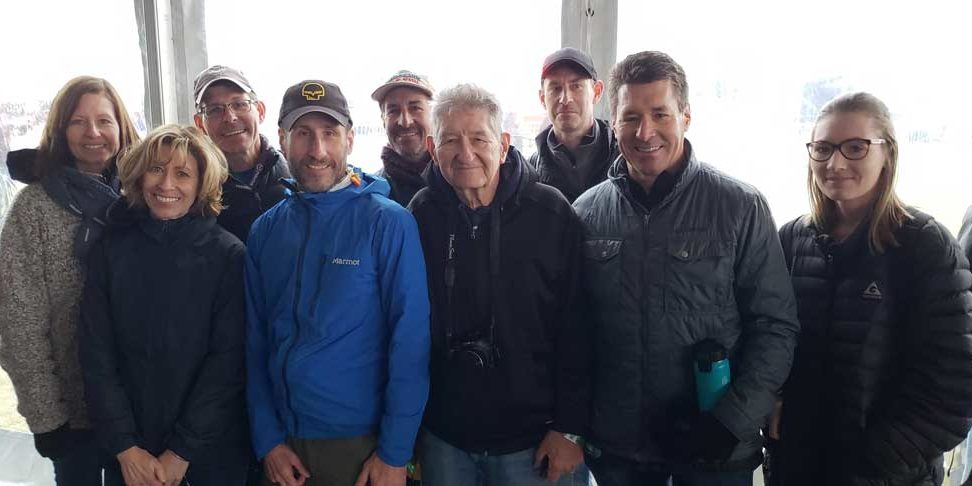 Is there a better way to spend your 50th birthday than hanging out at the Rolex 24 at Daytona? I honestly don’t know, as I’m not that old, but ask my brother Steve; he can tell you. It was his idea for the latest Reardon sibling 50th birthday celebration to be at one of our favorite pro races. Twenty-four hours straight of noise, crowds, more noise, campfire aroma, noise, and the very real possibility of being run over by a race car or tire trolley sounds like a pretty great way to celebrate your milestone day.

But I need to back up and add a bit of context before talking about the actual race. Steve is number six out of seven (leaving me for last) and has a classic Corvette. The oldest, Jim, is conveniently a Daytona resident, and used to be a certified “why would you waste money on a fancy Porsche” anti-car guy. But he has seen the light and now has a new Cayenne and is talking about a new Panamera to join the Cayenne. Mike does like cars, drove a “cool” Volvo sedan, and has kids. Tricia, likes cars, wants a Cayenne, but has kids, who like cars. Dan is more car nuts than I, but he has five kids. Kathy thinks cars are neat, but once again, has kids and used to drive a minivan. My 83 year old Dad is a retired aeronautical engineer and has designed and hand built four cars. Our 80 year old Mom puts up with all of us, nodding and smiling every time every conversation gravitates toward car talk. Mike, Dan, Tricia, and Kathy are all pro race rookies, but Kathy has been to numerous Kentucky Derbies. Sounds like the perfect recipe for a disastrous weekend.

Steve and I have each been to at least six Rolex 24’s, so we know the drill. Fly into DAB (airport-speak for Daytona Beach International Airport); arrive Thursday, get the full four day pass with garage and infield access; pack like you’re going back to the Himalayas, bring layers, and have a plan so you don’t zig zag back and forth around Daytona International Speedway as if you only have three hours to see every last thing there is to see. You have to remember you are there for FOUR days, and have plenty of time to see the all of sights. If you can, get an infield parking pass, but as those sell out before the ticket window opens, Turn 4 parking works okay as well. To my surprise, Kathy wanted to also arrive Thursday and wanted the full experience. I tried to explain to her the excitement of spending forty minutes watching mechanics change a front suspension upright. Dan also wanted the four day thing, but then I would expect no less from a car nut usually suffocating under tuition bills and grade school basketball practice.

Thursday is a great time to visit the garages. How the race teams can get anything accomplished, and cars moved through the mass of humanity choking the paddock amazes me. The family race rookies learned quickly that pedestrians have zero right of way and nearly getting run over by a Lamborghini driven by a dude wearing mechanic’s gloves is no joke. Arriving later in the day, we had enough time to watch some quali, enjoy sunny shirtsleeve weather, and check out some of the incredible manufacturers’ displays adjacent to the International Horseshoe and Kink turns. As much as I like Porsche, their little 20’x20’ cube was super lame compared to the F1 Paddock-esque displays from Mazda, Cadillac, Ford, Chevy, Corvette, AMG, BMW, Lamborghini, Acura, and yes, Hyundai. Kathy learned that Cadillac gave out the coolest looking t-shirts, and I learned that Corvette thinks all American males wear trash-bag sized clothing. My favorite part of Thursday used to be the only night practice of the weekend, especially walking adjacent to fence along the front straightaway, but alas we learned that is no longer allowed. Thank recent car-in-fence crashes for that.

Friday looked to be another bright, sunny, albeit cool day. This is a good day to finish visiting all of those manufacturer areas and scoping out where you want to watch the 24 hour race. Also plan a visit to the PCA tent and corral, as the Porsche club folks in Florida know how to put up  quite a tent. Then sit back and enjoy the four hour Michelin Pilot Challenge Series race. Think of this as your own personal practice session for watching the 24 hour race. This is also your first opportunity to walk on the grid for pre-race, stomp in the famous Daytona tri-oval grass, and experience the front stretch banking of 18 degrees (then imagine 31 degrees at the turns). Watching the start from the grandstands near Turn 1 is our favorite, eventually moving to a couple of infield spots along the International Horseshoe. After a fun race, Friday ended with an informative presentation and Q&A session by the Mazda DPi (Daytona Prototype International) team. Kathy became Mazda’s biggest fan after seeing all of their drivers up close.

Friday evening the rest of the Reardon clan was to arrive in Florida. Unfortunately, our Mom was not able to make it, so a Rolex 24 souvenir t-shirt was sent back to perform choir practice duty to prove she was there in spirit. With all the siblings and our Dad now together, Steve and I could educate the others of the race particulars such as multi-class racing, full course cautions, three and four driver teams, pit stops, and how to navigate the tram system organized by the local DMV.

Saturday is the big day; my advice is to get there early to witness the historic display parade laps, watch teams do final preparations, get driver autographs if you enjoy standing in line for three hours, and to visit the PCA tent and corral to see the full crop of cool Porsches. Unfortunately, we re-enacted the Sixteen Candles leaving for the wedding scene, so our arrival was not very early. Despite this, there remained plenty of time to look over the historic display, this year including several 911 GT3 Cup cars, and 1980’s Porsche racing prototypes, as well as some early American racing iron. Some of the group only had grandstand passes, but the rest of us enjoyed watching teams performing their final checks, and then maneuvering their cars though the huge crowds toward the grid. Once again, pre-race opens the grid to fans, and wow, this one aspect of the weekend tells the story of how much larger an event this race has become. In 2003 during our first visit, the pre-race grid was populated, but never felt crowded. In 2004, we could stand next to Paul Newman sitting casually on his golf cart. Fast forward to 2019 and the grid was mayhem. Ropes lined the path for the DPi’s as the cars and drivers were ceremoniously pushed into position. Beyond that, the tri-oval lawn and front banking was standing room only. Taking our position once again in the Turn 1 grandstands, the start of the Rolex 24 is such a rush. It was cool to see those in my family who had never experienced anything like this watching in honest amazement of the skill of those forty-seven drivers coming together into that very narrow Turn 1. I think we’ve gained a few new racing fans.

For anyone who watched the race, they know it rained a lot. And they know it ended under a red flag, one of many flags not colored green. As one driver stated during a sleep deprived TV interview, this race feels like an entire week rolled into one 24-hour period. As a spectator that also holds true. The adventurous souls in the family ventured back to the track until 1:30 am despite spending the entire morning and afternoon shivering in the unusually cold temperatures. A person hasn’t really experienced a Rolex 24 without smelling the late night campfires, humoring a random drunk 356A owner, or knowing the make and class of the cars rushing past, entirely by sound.

We stayed dry Sunday, watching the race from the comfort of the living room couch. As quickly as the weekend began, it was over. And so was the race. Fernando won, Porsche didn’t, and I was sitting in the airport a mere four feet from my sister’s new favorite Mazda drivers. What a great weekend!